Bruce Hickman was appointed Poteet’s Police Chief in 2015. He oversees a department of 10 full-time sworn officers. He is a department TCOLE instructor and firearms instructor.

Chief Hickman has over 15 years of experience in law enforcement. He previously served with the Atascosa County Sheriff’s Department as a Deputy and held the rank of Patrol Sargent. He is a longtime resident of the Poteet area and an Alumni of the Poteet High School.

Noe Rodriguez began his career in Law Enforcement in 1986 in Hereford, Texas where he served as a Patrol Sargent. He then moved to Pleasanton Police Department until 2014 as a Lieutenant. In 2016, he was hired as the Detective Sergeant for Poteet Police Department and later promoted to the rank of Lieutenant.

We have several Reserve Officers that donate their time and experience to fill in as the need arises for patrol shift coverage or special events. 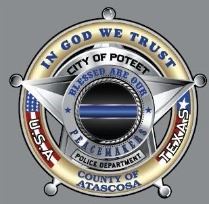